This recipe for feijoa paste comes from the April 2011 edition of the New Zealand House & Garden and is another great recipe for anyone who is faced with a glut of feijoas. It has been featured in Stack of Recipes where the chef describes it as a foolproof recipe and recommended serving it with tangy cheese and freshly baked oat cakes. I also really like the sound of the second preserving option given below – little squares of fruity goodness dusted with icing sugar.

*As an alternative, line a straight-sided flat dish with baking paper. Pour in mixture and smooth over with a knife. Give the dish a couple of taps on the bench to settle the paste. Leave to set for 2-3 days in a warm dry place, then cut into cubes when cold and firm. Dust cubes with icing sugar and pack in a tin or jar, or place in a box lined with waxed paper, with the added sifted icing sugar.

This recipe is great for when you have too many feijoas and you want to preserve them for use all year round (but in all honesty no-one really expects them to last that long).

This recipe was found at New Zealand Cuisine.

Feijoas (also known as pineapple guavas and guavasteen) are an exotic, divinely-flavoured fruit native to South America. Small, green and egg-shaped, the scent and flavour sometimes defy description. Pineapple, banana, mint, strawberry and guava flavours all mingle to create a taste sensation that is wonderfully addictive! 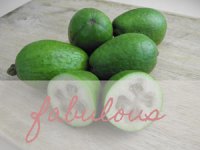 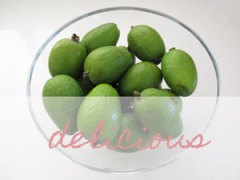